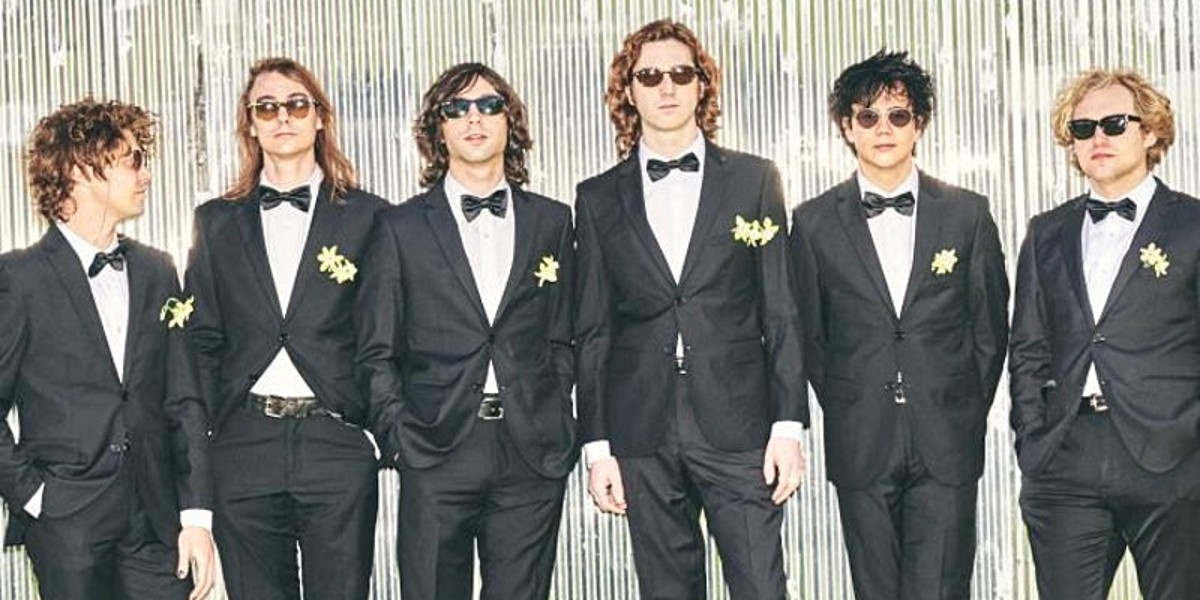 *All events are 21+, valid ID required for entry*

Formed in a North Carolina dormitory in 2012, The Nude Party celebrates the clanging frat rock of the ’60s. Working with early mentor and producer Oakley Munson of Black Lips, they debuted with the Hot Tub EP in 2016. The band’s eponymous full-length debut arrived on New West Records in 2018, and their critically-acclaimed follow up album Midnight Manor was released in October 2020.

Originating as an extended group of childhood friends and step-siblings who decided to start a band and then began learning to play instruments, The Nude Party took root at Appalachian State University in Boone, NC. The band is comprised of lead vocalist/guitarist Patton Magee, vocalist/lead guitarist Shaun Couture, organist/pianist Don Merrill, bass player Alec Castillo, percussionist Austin Brose, and drummer Connor Mikita. Most members also sing backup. Soon after coming together, the sextet soon moved into a lake house and started a nightly ritual of jamming in the basement. It was at a regular gig as the house band at a certain Boone party locale that the group’s practice of performing in the buff earned them a local reputation as “the naked party band.” They adopted the moniker The Nude Party just in time to move onto bookings at local clubs and bars, where they had to perform clothed.

In 2014, the band met Black Lips’ drummer Oakley Munson at a show in Charlotte. He took an interest in the group and recorded their first collection, Hot Tub EP, which they released in early 2016. As word of the EP’s rawness and good-times spirit spread, the band relocated to Munson’s base in the New York Catskills and began to perform regularly in Brooklyn and the surrounding region. New West signed the group for their Munson-produced full-length debut. The Nude Party was released in July of 2018 and was heralded by Rolling Stone as “equal parts ‘I’m Waiting for the Man’ Velvet Underground and Exile on Main Street Stones.” In the year following it’s release, the band opened for the likes of The Arctic Monkeys and Jack White.

In accordance with Philadelphia’s citywide mandate, attendees will be required to show proof of Covid-19 vaccination for entry to all Johnny Brenda’s events. Please note that negative PCR / antigen test results will not be accepted. We ask that you bring your vaccination card, a copy of your vaccination card, or a legible photo of your vaccination card on your phone. Full vaccination must be completed at least 14 days prior to the date of the event. If you are unable or unwilling to provide proof of vaccination, we will refund your tickets in full. Please feel free to e-mail us at [email protected] with any questions or concerns.

All Johnny Brenda’s events will be presented in accordance with city & state guidelines and requirements as of the date of the event, which could include changes to capacity, attendance prerequisites, procedures, and other protective measures. Any updated protocols will be included in your ticket reminder e-mail closer to the event date.