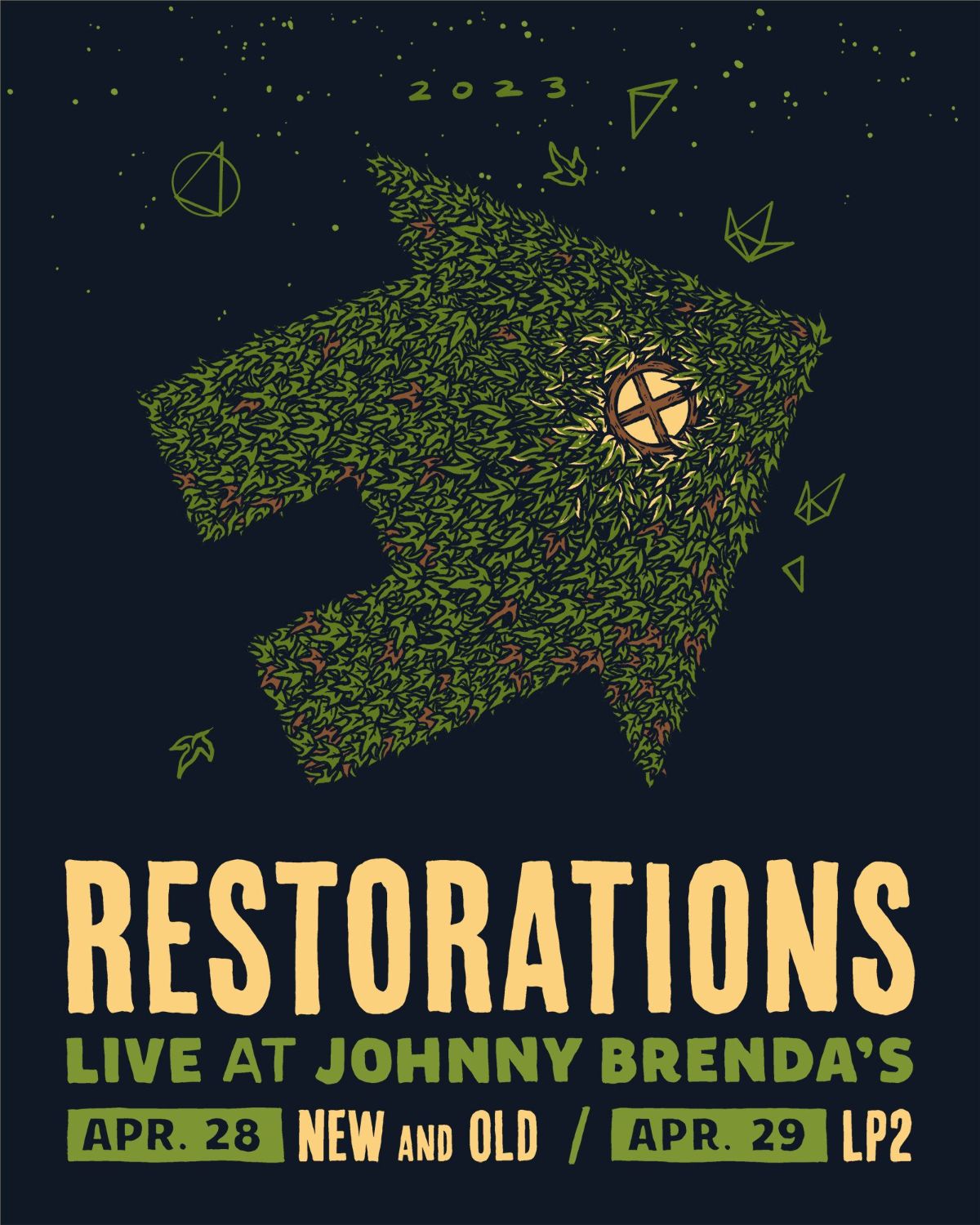 Restorations isn’t the same band that released LP2 in 2013. It undeniably defined their sonic footprint while marking their SideOneDummy debut. The band has since rearranged themselves in varying locales and vocations, bringing different perspectives on creativity and commitment. There’s a passion for growth and improvement that has sustained since they were just a crew of friends haunting local Philly practice spaces.

While things might have been building slowly on their own, it was the introduction of LP2 that inarguably clicked it all up to 78 RPM. The originally intended “low-key local act” was now discussing offers of national and international touring opportunities. And now, 10 years later, there are too many stories and perspectives to cover. Age isn’t a definition, it’s just an accruing of vintages, wine and vinegar.

How do you make the most of the milestones? Perhaps you just stop wondering and start celebrating. An album is its own entity: a static window that gathers haze on the corners. Do the songs evolve or just the artists and their audience? Perhaps it’s all answered in the mounting tension of the washed guitars in LP2’s opening track “D.” The cyclical echoes are forced into a linear crescendo as the full band kicks in. Calculated reckless abandon. A collection of lead ups and dynamic shifts that announce and speak for themselves, no matter how many plays. LP2 is 10 years old, but the way it feels is always aging. Whether it’s wine or vinegar depends on how much haze has gathered on your window.

Fever Museum is the first LP from the Cleveland and Philadelphia band Orbits. Recorded remotely over the course of 18 months while navigating the tedium and anxiety of the global pandemic, Fever Museum is a concise yet sonically vast listen. Listeners of members Toby Reif (the Sidekicks) and Maxwell Stern’s (Signals Midwest, Timeshares, Meridian) past output will find themselves in familiar territory, yet Fever Museum’s densely layered vocals, downtuned guitars, synthesizers, and odd timings position the record as a unique vessel for exploring ideas well outside the realm of their past output. Drummers Adam Beck (Into It. Over It., Sincere Engineer) and Eric Slick (Dr. Dog, Waxahatchee) also lend their talents to the recordings, sharing space with Reif’s programming. Bassist Chris Baglivo (Superweaks) and drummer Jarret Nathan (Pears) round out Orbits’ live lineup.

The remote aspect of writing and recording for Orbits was a natural fit for Reif and Stern. The two first met on a music forum in 2006, sharing tracks from their high school bands via mediafire links and snail-mailing burned CDs. Their music careers began in parallel, with Reif booking shows from his dorm room in Bellingham, Washington, and Stern touring from his native Cleveland. After meeting in-person for the first time in 2011, the two began traveling the world with their respective projects, often crossing paths and occasionally pinch-hitting in each other’s bands. It wasn’t until 2020, with Stern living in Philadelphia and Reif coincidentally finding himself in Cleveland, that the two began writing together. They released their first music as Orbits, the Rising Tide in the Spirit Room EP, on New Year’s Day 2021.